1. The mythology of understanding as something “inner”

As I discussed in my previous post, a rapid series of modulations brings us to the topic of understanding when, at the end of §138, the interlocutor says:

But we understand the meaning of a word when we hear or say it; we grasp the meaning at a stroke, and what we grasp in this way is surely something different from the 'use' which is extended in time!

This is probably the strongest objection so far to Wittgenstein's account of meaning. Its power stems from the way it ties into various extremely tempting ideas about the process of communication. Above all, it suggests that understanding is some kind of thing that we acquire when we learn the meaning of a word, and which is subsequently represented to us whenever we hear that word.

Moreover, when we hear words we are immediately aware of our understanding. The words strike us in a quite vivid and particular way. We don't simply hear sounds or see ink-marks on a page (or shapes on a computer screen) – we hear (or read) language. We experience the meanings that it conveys. To see that this is so, just compare the case of reciting a passage we don't understand (having learnt it parrot-fashion, perhaps) with that of reciting one whose words are familiar to us. Surely it is undeniable that what happens inside us in the two cases is completely different?

Such considerations present a challenge for Wittgenstein. When we understand a word we understand its meaning. But what we grasp in the instant of understanding doesn't seem to be anything like a use. (And, in any case, is use something that could be grasped in an instant?) But if what we grasp isn't use then meaning can't be use.

2. Pictures and their application

Wittgenstein begins his assault on this appealing conception by considering the notion that understanding is a picture that comes before our mind when we hear a word (§139). It's a natural enough place to start given that his early philosophy propounded what's called “the picture theory of language”. Moreover, that theory was itself a refinement of a venerable philosophical position dating back at least as far as Locke's Essay Concerning Human Understanding. In my last post I gave a rough sketch of the account of communication that the picture theory tends to suggest. It might be helpful to repeat that here:

Person A has the thought, in the form of a picture, that things are thus-and-so. She wants to communicate her thought to B so she “converts” it into a proposition: she speaks, writes, uses sign-language or Morse code, etc. The words she uses relate to the elements of her picture and are arranged in a similar fashion. Next, B perceives A's proposition and he re-converts it into a thought. That is to say, the words he hears (reads, etc) produce a picture in his mind. That picture is his understanding of what A said. If he has the same picture he has understood correctly; if he has a different picture then he has misunderstood (and if he has no picture at all then he has not understood at all). The correctness of his picture can be inferred from his behaviour. Of course, we can't be sure B's picture matches A's but so long as he fetches the right object (etc) then it is reasonable to assume that it does.
In attacking the idea of understanding as a picture, it is this last part of the account that Wittgenstein focuses upon: the link between the picture and subsequent behaviour. He points out (§139) that, whatever might happen in our minds, our behaviour is still a criterion for understanding. If someone consistently uses a word incorrectly then we say that he or she doesn't understand its meaning. So understanding is clearly bound up with use in some sense. But if understanding is a mental picture then what is the link between that picture and use? “Can what we grasp at a stroke agree with a use, fit or fail to fit it?” (§139.) Wittgenstein suggests an answer to his own question: let's assume that when I hear the word “cube” I get a picture of a cube in my mind. If I point to a cube my use fits the picture, but if I point to a triangular prism instead then my use has failed to fit the picture.
At first blush this seems straightforward, but Wittgenstein argues that it will not do. The problem is: who is to say that pointing to the triangular prism actually is an incorrect use of the picture?
His objection is couched in terms of the picture's “method of projection”. I assume that's a glance back to Wittgenstein's time as an engineering student and refers to techniques used in technical drawing. I'm afraid I have roughly zero understanding of such things (I looked up geometric projection on Wikipedia and it didn't help) but there are other ways of making the same point. Basically it comes to this: a picture by itself stands in need of a method of application. If no method is stipulated then it's impossible to say whether a picture has been used rightly or wrongly.
So, returning to the example of “cube”, the word presents me with a picture: 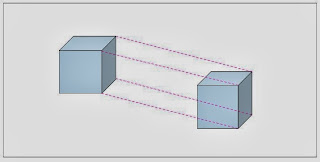 From Logical Form to Understanding: the Transition from §137 to §138


That thought, it seems to me, completes the chain of argument that leads from the discussion of propositional form in §137 to the topic of understanding at the end of §138. Wittgenstein's criticism of “fitting” in relation to truth-functionality causes the interlocutor to defend the notion of sense from whence the necessity of truth-functionality originated. And criticism of the notion of sense in turn provokes an appeal to the nature of understanding, because the immediacy of understanding can only be understood (it seems) if something like the Tractarian account of sense holds good. By now we have indeed moved away from the explicit theories of the Tractatus (which is notoriously silent about how thought, understanding etc actually work), and so in a way Fogelin, Hacker et al are right: §138 represents a break. But it shouldn't be thought that we've moved on to completely unrelated issues. We have moved from the explicit theories of the Tractatus to the implicit assumptions that lay behind them.
Posted by Philip Cartwright at 20:20 4 comments: